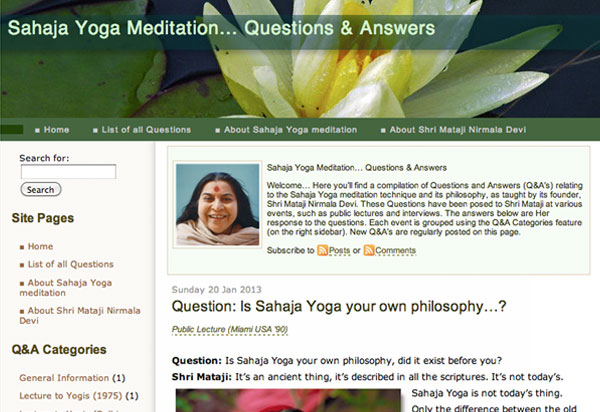 Doing a practice such as Sahaja Yoga Meditation, arise many questions, which only can be answered in deeply, thoughtless awareness.

Meditation gives you the answer, that you´ll need, when you´ll need it.

But you can read and understand more aspects of the effects of the meditation and how it changes the outlook towards the outside here:

An example for a question could be:

Question: Shri Mataji, what is Sahaja Yoga? I mean, what is the main idea of it?
–  Shri Mataji Nirmala Devi: Sahaja, Saha means with, Ja means born. Born with you. That is spontaneous. Yoga means Union with the Divine. Now, many people in the modern times won’t believe there’s anything like Divine. But supposing I say, “There is,” with an open mind of a scientist you must accept it as a hypothesis to begin with. Now, we have the Divine power, very subtle power everywhere, but we can’t feel it. With our human awareness we cannot feel it. With human awareness we also don’t know the absolute truth, we live in a relative world. So there has to be a breakthrough. And the breakthrough has to take place in our evolutionary process. And Sahaja Yoga is the method which gives you that breakthrough.

Q: How does it do this?
Shri Mataji Nirmala Devi: Now, within us is placed – is a energy which we call as Kundalini in Sanskrit language, which is a residual energy in the triangular bone called as Sacrum also means sacred bone, so maybe the Greeks knew about it. It rises like a primule in a seed, passes through six centers and pierces through the last one here and gives you what we call as the Self Realization or real baptism – real. That’s what it is. And then, on your central nervous system – on your central nervous system you can feel the existence of this All pervading Power. You can feel all around you there’s Cool Breeze. And you can feel on your fingertips your own centers which are subtle and the centers of another person, which Jung has described that one has to be collectively conscious. It’s a happening that has to take (place) within ourselves. It is not mental, it’s not physical, it’s not emotional – it’s beyond that.