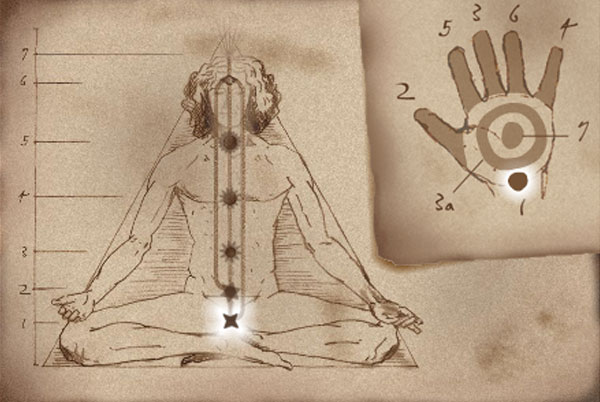 When the evolution began, what was formed was the first amoeba cell organisms. After that they became more and more complex, developing into multi-cellular organisms, and ultimately to humankind.
The first chakra, named the Mooladhara Chakra is made of the earth element and it represents the start of life. When it is awakened and nourished, this association with the earth element manifests as a magnetic force within the person.
In Sanskrit, “moola” means root (which is the Kundalini) and “adhara” means the support – so Mooladhara translates into the supporter of the Kundalini.
For instance a person with a strong qualities at the Mooladhara center has a good inner sense of direction (in more ways than one). The Chakra is at the root or foundation of the subtle system, and Mooladhara is situated below the abode of the Kundalini, at the base of the subtle body.
The basic quality of the Chakra is innocence, which is formed on the basis of every righteous character. This innocence is the type of quality, which is visible and expressed in babies and small children.

It represents action without motive or desire for gross personal gain. This innocence is labelled by the innate wisdom of a child. A baby knows fundamental aspects of nature by instinct – it knows how to show discomfort by crying, or how to suck to obtain food.
You can download a presentation here

Listen to a talk by Shri Mataji about the Mooladhara chakra: